One of PC Workshops latest customers had tried to restore to factory settings to her tower after suffering several blue screens, but the cycle would not complete as it stalled with an error message halfway through which upon investigation proved to be the power supply unit inside which the fan had failed thus not ventilating the power coils.
Now a power supply unit isn’t the most expensive part of a computer or the most complex but without an operational one nothing will work which doesn’t mean to say that you’ve lost all your documents, pictures etc as the hard drive doesn’t suddenly become corrupt (well rarely) and even then we have ways and means of extracting data from the deadest of equipment. we’d better have for the monies we’ve paid out for data recovery programmes.

It’s not recommended that an inexperienced user open a power supply to make repairs because of the dangerous high voltages present. Even when unplugged, power supplies can retain dangerous voltage and must be discharged (like a monitor) before service. Such internal repairs are beyond the scope of this blog and are specifically not recommended unless the technician knows what he is doing.
Many symptoms lead me to suspect that the power supply in a system is failing. This can sometimes be difficult for an inexperienced technician to see because, at times little connection seems to exist between the symptom and the cause-the power supply.
For example, in many cases a parity check error message can indicate a problem with the power supply. This might seem strange because the parity check message specifically refers to memory that has failed. The connection is that the power supply powers the memory, and memory with inadequate power fails. 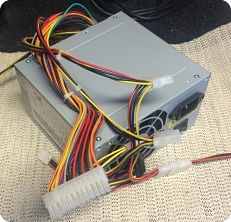 It takes some experience to know when this type of failure is power related and not caused by the memory. One clue is the repeat-ability of the problem. If the parity check message (or other problem) appears frequently and identifies the same memory location each time, I would suspect that defective memory is the problem. However, if the problem seems random, or if the memory location the error message cites as having failed seems random, I would suspect improper power as the culprit. The following is a list of PC problems that often are related to the power supply:

In fact, just about any intermittent system problem can be caused by the power supply. I always suspect the supply when flaky system operation is a symptom. Of course, the following fairly obvious symptoms point right to the power supply as a possible cause:

This can also apply to laptops when its running on DC only as the battery is no longer doing its job.