Here at PC Workshop we see a lot of start up problems and the one we’ve encountered today is quite a common problem, when a system is first started up and you see this error message – “No bootable device insert boot disc and press any key”

In some cases the error message appears due to hard drive failure. The system is trying to boot from network since it is unable to detect the hard drive and thus showing the error message regarding PXE (Preboot eXecution Environment) but it can also be that the system has crashed due to a windows update.

To confirm, restart the system and press F2 during start up to access CMOS setup utility (you need to repeatedly tap F2 after turning on the system)

(The exact key combination to enter CMOS setup may differ for your system. If F2 does not work, try F1 or Del during start up)

See if the hard drive is listed in the first page. If the system is able to detect the drive, it will show the model number of the drive, and in some system, its capacity.

For demonstration purposes the picture below show that this hard drive was found. 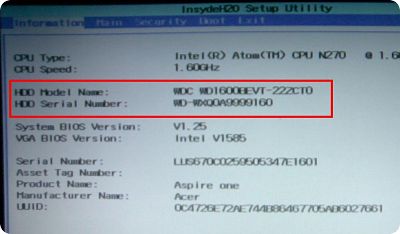 If the hard drive is not listed, you can try the following steps to reset hardware ONCE:

1 Disconnect the battery and ac adapter (if connected). If there is any devices connected to any of the USB ports, disconnect the same.
2 Wait for 10 minutes
3 Press and hold down the power button for 30 seconds and release power button
4 Reconnect the battery and charger, and turn it on
5 Once the system starts, repeatedly tap F2 key to enter CMOS setup
6 Then press F9 to load default settings
7 Press F10 to Save and Exit setup

If this remains same, then the problem is with hard drive,  and we need to replace the hard drive.

On this occasion it actually was a hard drive failure but prompt action enabled us to rescue most of the documents, photos etc. as they hadn’t been to badly corrupted with repeated attempts.

A new hard drive was duly fitted and an operating system reinstalled,  his old data was scanned and transferred to his new system which was now running super fast which was an added bonus for the customer as he had mentioned its lack of pace before the hard drive had crashed.