A customer who we had been recommended to rang to ask what could be done for his iMac which was showing the spinning beach ball, so instead of being able to work smoothly it was a stuttering performance, stopping every other minute to all0w the hard drive to catch up, hardly a good situation. 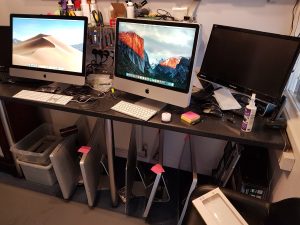 Whether its an iMac or a MacBook the end results are superb.